Since 1906, the name of the highest mountain peak in the French Alps has been synonymous with the highest craftsmanship in manufacturing writing instruments made in Hamburg. After the company founders renamed their writing instrument manufactory, first under the name "Gold Fountain Pen Factory Simplo Filler Pen Co" and then under "Simplo Filler Pen Co", to the Montblanc-Simplo G.m.b.H, the products were no longer called "Rouge et Noir" or "Simplo Pen". The product range became the name pof the company itself as a brand name.

Groundbreaking technical developments shaped the zeitgeist of the early 20th century. Through the revolutionary invention of the automobile, individual mobility overnight became an integral part of daily live of broad layers of the population world-wide. It acted as an accelerator for ideas that had previously only slumbered in drawers.

One of these developments for which the travel-boom has had such a catalytic effect is the fountain pen. Writing with pen and tine was already done before, but now there was a need for a writing instrument that could be used anywhere regardless of an inkwell, because it always carried sufficient ink supply with it safely from leaking. In the early years of the fountain pen, this innovation was clearly highlighted in advertising by visuals on advertisements addressing how writing and travel fit together perfectly via the so-called safety fountain pen. "With a Rouge-et-Noir fountain pen you don't make a Klekse" was the copy on one of these ads.

By the way: Fine leather products as travel companions can be found in the Montblanc range from the mid-30s of the last century until today – with a range from purses, organizers to belts, briefcases and travel trolleys.

Montblanc in Hamburg can claim to have helped the fountain pen achieve a breakthrough worldwide. However, two of the three company founders had previously found inspiration and templates for perfecting this development abroad, especially in the "New World" and in England, where they got in touch with the infancy technology of the fountain pen and became enthusiastic about it.

Consequently, in 1906, the engineer August Eberstein and the merchant Alfred Nehemias founded a small workshop in Berlin for the production of fountain pens. From the very beginning, the sales activitiy had an international focus. The nucleus for Montblanc was created.

Soon the duo met C.J. Voß, described as a banker in some Montblanc chronicles. Today one would probably say business angel or venture capital bank, because C.J. Voß was an investor and mentor in the search for promising products and as such he saw the fountain pen. He realized that the Berlin "start-up" needed a way more professional setting to become successful. It was him who procured the necessary capital so that the SIMPLO Filler Pen Co. and later Montblanc-Simplo G.m.b.H could be founded in Hamburg in 1907.

Hamburg is often referred to as the gateway to the world, but this was definitely true for Montblanc, as the brand expanded as early as 1909/10 and founded sales offices in Paris, London and Barcelona and subsequently conquered the whole world - always only temporarily interrupted in times of war.

The most iconic writing instrument of all time, the Meisterstück, was introduced in 1924. The masterpiece is on display at the Museum of Modern Art in New York. Often this fountain pen has also been referred to as a ‘power pen’, in recognition of the many important contracts that have been signed with it internationally. 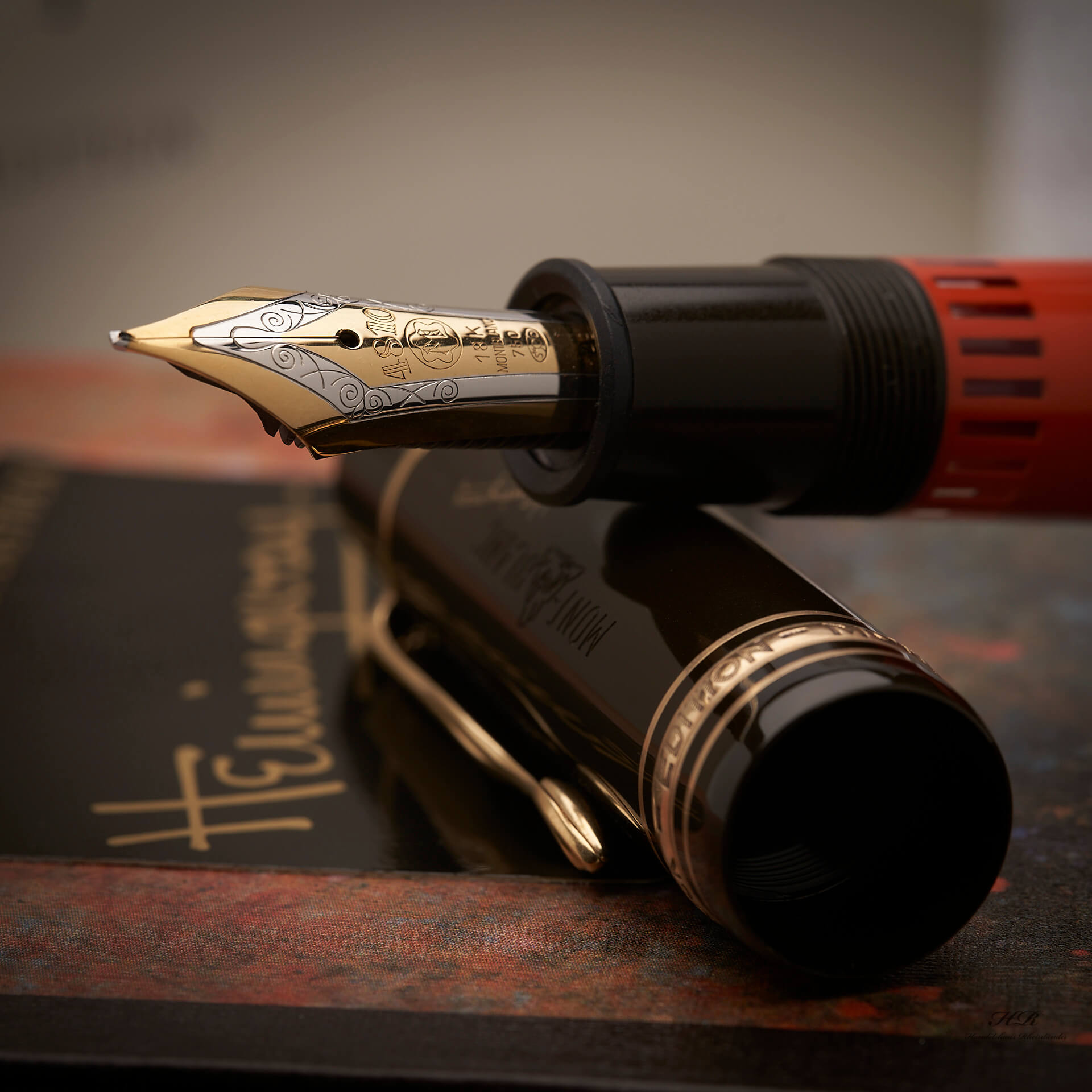 What drives a Hamburg company to choose the name of a mountain peak in the French Alps as its brand name? Very simple: They wanted to send a signal that the product quality of the manufactured writing instruments is extremely high and therefore took a high mountain as a reference. At first glance, the Zugspitze would therefore also have come into question as the brand name for a company located in Germany. But neither phonetically nor in terms of height could it keep up with Montblancs ambitions and would have given the internationally oriented company a provincial touch. In addition, at the beginning of the 20th century, it was considered an expression of sophistication in better circles to communicate in French, often in a melange with one's own mother tongue.

After the brand name, the logo for Montblanc was created with a slight delay. While the first devices from the Rouge et Noir series made of black hard rubber still had a red cap top, from 1914 onwards the brand symbol still used today, the white Montblanc star, prevailed. This is only seemingly the image of a star – the snow-capped summit of Montblanc, from which 6 valleys descend in all directions, is to be symbolized. With its rather soft lines, not like a star that is usually sharp-pointed, the brand symbol balances the rather masculine, strict typo of the Montblanc brand name. In any case, the Montblanc "star" has become one of the world's best-known brand symbols.

Another reminiscence of Montblanc can be found in many Montblanc products today: the number 4810. It stands for the height of Montblanc measured at the beginning of the last century and recorded in atlases and has adorned many feathers of Montblanc fountain pens as embossing since 1930, namely those from the Meisterstück series. It is also used as a limitation number for the annually reissued Limited Edition Patron of The Arts.

Montblanc Brand Image – Handwriting as a value in itself

A perfect product in terms of quality is not sufficent to explain the fascination of a brand. A flawless in every respect in terms of design, workmanship, durability is a is simply a matter of course for a luxury brand, but never the sole, neither the decisive purchase motive. When people choose a Montblanc product, they end up doing it because of the brand and its appeal.

Writing as a cultural technique is one of the outstanding achievements of human history. The ability to write and read is essential for the development and cohesion of societies, as it is the prerequisite for any form of education. From this perspective, the tools with which writing takes place are "systemically relevant".